This month’s newsletter spotlights a guest column by Alison McIntosh, deputy director of policy and communications at Neighborhood Partnerships and coordinator for the Oregon Housing Alliance, which is composed of 85+ member organizations and supporters from around the state.

Each year in February, the Oregon Legislature convenes to write or balance a budget, to pass laws to improve our state, and to address pressing issues. Each year, housing advocates come together as the Oregon Housing Alliance to present the Legislature with ideas, proposals and requests to help more Oregonians have safe, stable and affordable places to call home.

In 2018, as in all even-numbered years, the legislative session will be quick — only 35 short days. To meet the constitutionally imposed time limit, legislators focus on a small number of issues and impose strict deadlines for committees. To the legislators and advocates, each day may feel like a week, but the session will move incredibly fast. For housing advocates, this gives limited but important opportunities to advance our work this session.

The Oregon Housing Alliance has come together every session since 2005 to ask the Legislature to create housing opportunities for Oregonians. Our coalition talks about a range of topics, including homelessness, tenant protections, increasing access to homeownership, development of new homes and preserving existing homes.

In 2018, the Housing Alliance will  be asking for one big step forward: to increase the document recording fee. This fee is used to ensure more of our neighbors can find safe and affordable homes. The fee is paid when someone buys a new home or property, and it goes to make sure others can have the same. Some of it goes to help our neighbors avoid homelessness through emergency rent assistance, another part goes to build and preserve critical affordable homes throughout Oregon, and a last part goes to help families to afford first homes through down payment assistance or to attend a homeownership education class.

Oregon is facing our biggest housing crisis to date, and we’re glad we have so many tools and partners to meet today’s challenges. We know how to successfully create housing stability and opportunities for families; more resources through the document recording fee will go a long way to address the crisis facing our state. Other priorities will be identified in early 2018, when the Housing Alliance releases its 2018 Housing Opportunity Agenda.

The Housing Alliance is organizing for Feb. 15 another Housing Opportunity Day, a chance for housing advocates and anyone who cares about finding solutions to our housing crisis to go to Salem to learn more about working together to make change. It’s fun and important! Read more here.

Oregon needs us to come together, calling on creativity and innovation, to create housing opportunities that will carry Oregon forward, make families and communities stronger and more vibrant, and build a more equitable foundation for all. Please sign up for our mailing list here to stay in touch with the Housing Alliance and get updates on how you can join this important work.

— Alison McIntosh, deputy director of policy and communications at Neighborhood Partnerships and coordinator for the Oregon Housing Alliance, which is composed of 85+ member organizations and supporters from around the state 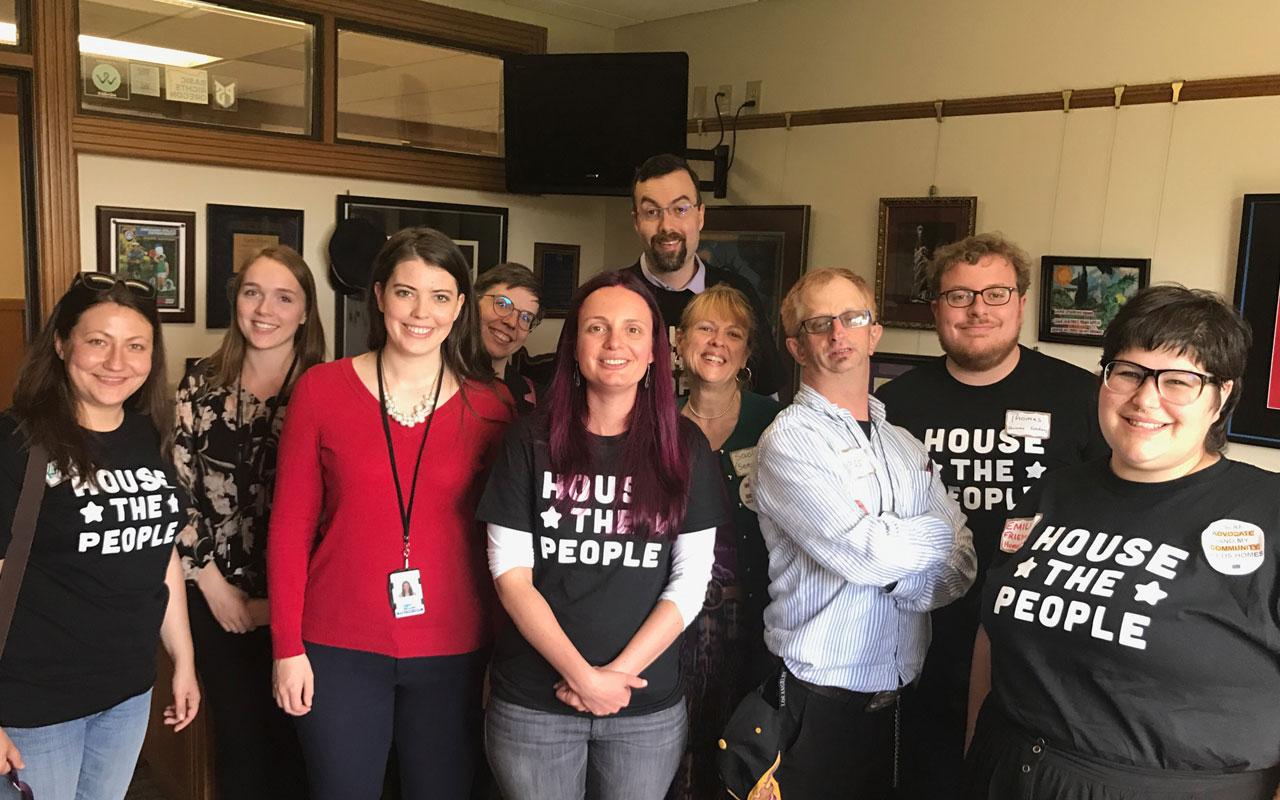 Attendees at Housing Opportunity Day 2017 gathered in Salem to advocate to lawmakers for much-needed resources to meet Oregon’s housing needs, including a visit with legislative aides for Rep. Carla Piluso, D-Gresham, and a self advocate with the Oregon C

The 2017 Oregon legislative session started with big promises. The business community, advocates and legislators had hoped to develop a revenue package that would avoid massive cuts to safety net programs.

Unfortunately, those hopes were dashed due to party politics and the lack of political will in Salem to address Oregon’s ongoing housing crisis.

Saying that, there was good work to addressing housing issues that we all collectively accomplished this legislative session.

“The Oregon Legislature said addressing our housing crisis was one of their top priorities heading into the 2017 session,” said Alison McIntosh with the Oregon Housing Alliance. “We made progress in some areas, including investments in emergency rent assistance, development, and preservation.”

“However, the Legislature failed to pass legislation that would have provided basic protections for people who rent their homes,” McIntosh goes on to say. “While we are grateful for the leadership and investments, we know the Legislature has more work to do so that all Oregonians have safe, stable, and affordable housing. We know that together, we can solve our housing crisis. People in our communities don’t need to sleep or die on our streets.”

The Oregon legislature delivered on some important revenue options to support affordable housing and homeless services.

The following investments were made in Salem.

These investments were absolutely critical to go to support our most vulnerable residents in Oregon.

Saying that, in order to begin to address the housing crisis statewide the governor and state legislature are going to have to start prioritize housing in a more intentional way.

Street Roots estimates that Oregon should be investing an additional $250 million annually in affordable housing projects and tens of millions more for emergency homeless services.

Of course, the biggest loss for Oregonians was the lack of action on tenant protections and the ability to move legislation to avoid subsidizing wealthy homeowners through the mortgage interest deduction program.

By not creating any restrictions on landlords for rent increases or no cause evictions the Oregon legislature is more or less helping contribute to homelessness and gentrification.

People on social security, elders, single parents and others will continue to be faced with hard choices, displacement and homelessness.

Let’s not forget that many elders and people with disabilities have monthly incomes of less than $750.

It doesn’t take a mathematician or an economist to understand that that’s not going to pay for a safe place to call home on the private market.

The reality is without government intervention Oregonians will continue to be evicted from their homes without having any housing alternatives.

The legislature also walked away from more than $300 million of ongoing money that could be going to support people in poverty and affordable housing by not reforming the mortgage interest deduction program. Oregonians making more than $200,000 or who own two or three homes in Oregon are currently being subsidized for housing while thousands of Oregonians are sleeping on our streets or in emergency shelters. That’s not even close to be equitable.

We have work to do

The Oregon legislature for too long has gotten away with managing the issue of affordable housing, instead of making it a priority. Housing should be every bit as much of a priority for Oregon Democrats and Republicans as jobs, transportation and schools.

The housing crisis in Oregon is not going away. In fact, given the current political climate in Washington D.C., growth speculation around the state and the loss of living wage jobs — we fully expect the problem to continue to get worse before it gets better.

It’s up to all of us to work together to help create political will to help end people’s homelessness and to invest in affordable housing. We know that without housing, it’s impossible to have a healthy society. Let’s do better together. Let’s find a way to continue to support an affordable housing movement in Oregon.

— This article ran in Street Roots on July 7, 2017, http://news.streetroots.org/2017/07/07/director-s-desk-legislative-session-leaves-little-poor-celebrate 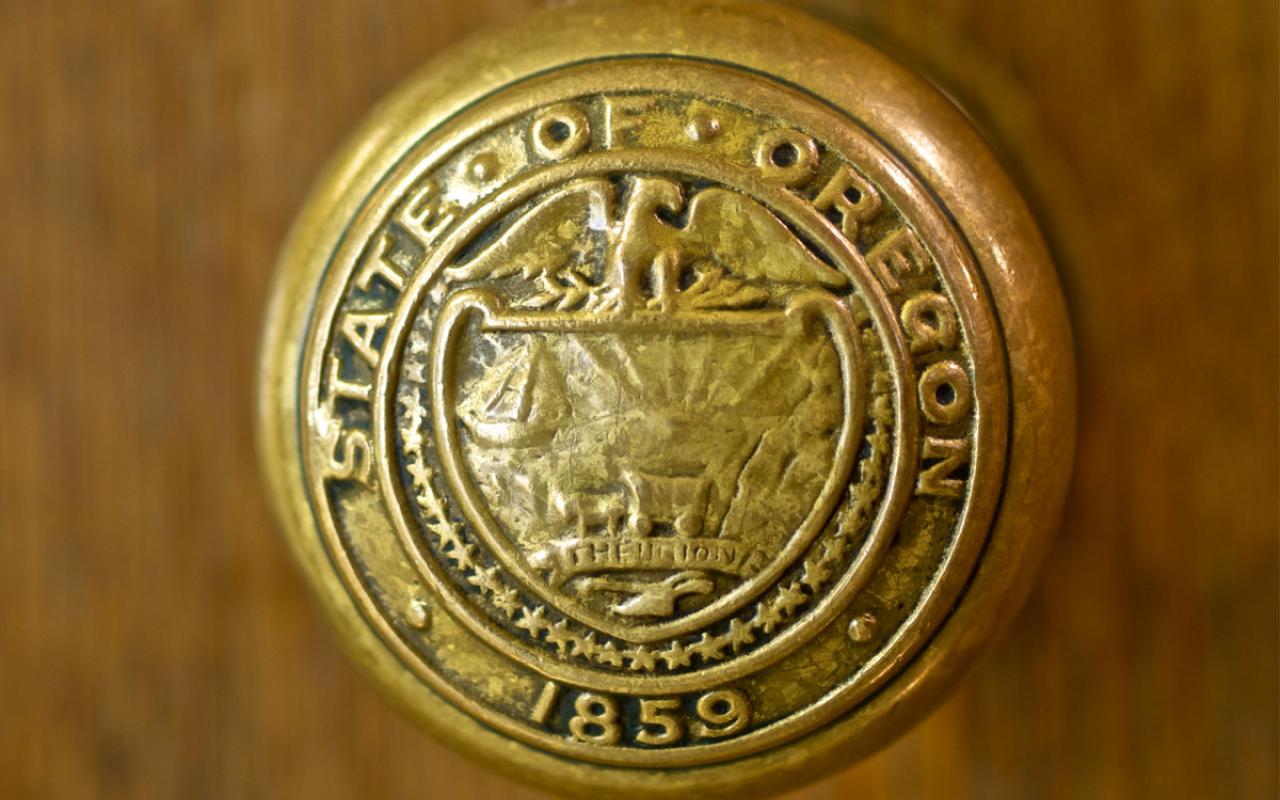 The handle of a doorknob at the Capitol building in Salem reads, "State of Oregon – 1859."